From Impressions to Mail: How I Learned to Love Postcards

Find me on:
LinkedIn 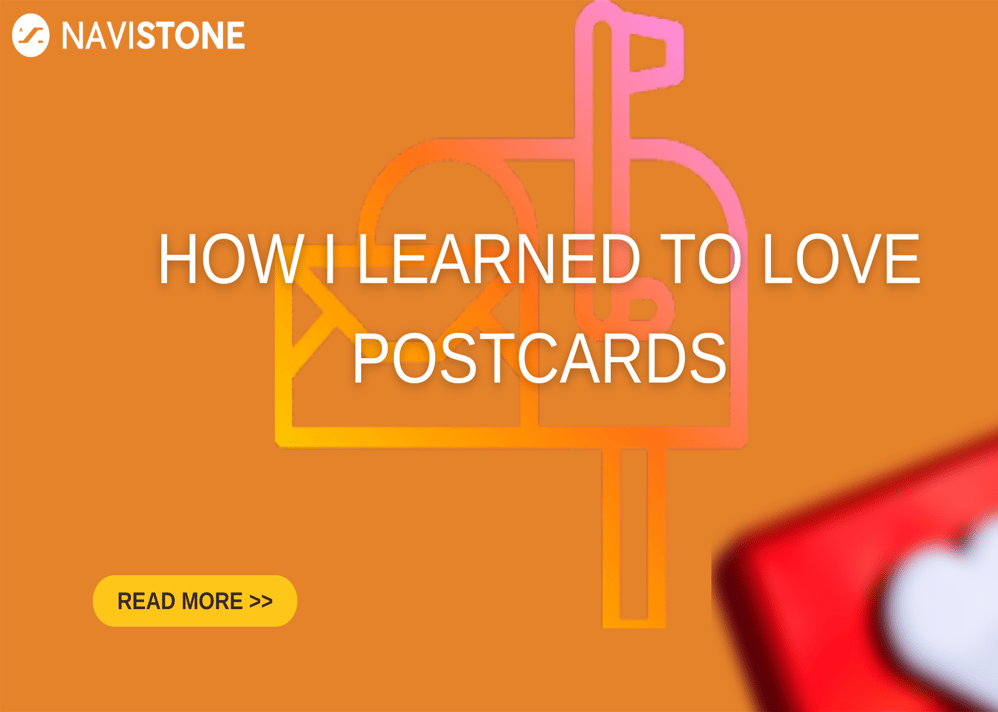 The switch to digital media consumption and the rise of ecommerce have created structural shifts in the media landscape and marketing spending. I would offer that considering different media choices is in every advertiser’s best interest. While recent years have seen an understandable, dramatic shift to digital, that may leave ‘arbitrage opportunities’ in other media choices that savvy marketers can experiment with. Let's talk about postcards...

From Impressions to Mail: How I Learned to Love Postcards

Once upon a time when I was with a very large corporation, I launched what could generously be called my first direct mail campaign.

We were sending tens of thousands of letters to consumers every month; the postage was already paid so every envelope was an opportunity to bundle a marketing message at near zero incremental cost!

All of our tests yielded great results. But I will never forget sitting down with a North American media leader who essentially said “meh, not enough reach, I can get more impressions with a single FSI [free standing insert for those of us who haven’t worked in newspaper advertising].”

My message on cost per household trial (when combined with my mediocre salesmanship) did not prevail - our program remained a niche effort.

Fast forward to 2022, quite a lot has changed in the media world, driven by platforms and consumer behavior. The switch to digital media consumption and the rise of ecommerce have created structural shifts in the media landscape and marketing spending. A generation of marketers may have never used (or even seen!) an FSI.

But how advertising works remains the same. As Byron Sharp notes in ‘How Brands Grow’ – “Without noticing…there is nothing.” This is one of the ways that marketing via postal mail really shines in 2022.

Specifically, there are three different variables that get me really excited about postcards as a media choice, especially when compared to some digital media vehicles that have grown so much in recent years.

Email deliverability rates vary tremendously. The simple question “did this reach an inbox?” can have a very wide range of answers, and even then, the answer may come with qualifications. Was it delivered to a consumer in the intended market? Was it delivered to an inbox or to the Gmail ‘Promotions’ or ‘Updates’ folder to languish?

This stands in sharp contrast to postcards, where we see 98%+ delivered (to actual US households).

While identifying who to deliver to is not a trivial exercise the USPS is fantastically reliable.

One of my favorite features of a postcard is that it is delivered already open! That may seem obvious but every step we ask a consumer to take along the path to purchase is a potential offramp to an outcome other than the one we want.

Having a 100% open rate ‘baked in’ is a fantastic postcard feature.

Of all of the challenges advertisers have faced in modern marketing, viewability may be the one with the greatest asymmetry of information. While organizations such as the MRC have defined standards around viewability, they are incredibly difficult to enforce or independently verify.

A single pixel viewable for greater than zero seconds may be a standard more appealing to digital platforms in a position to self-report on (and bill on) ads viewed.

But as with open rates – postcards have a structural advantage when it comes to viewability…by their nature at least 50% of the message is inherently viewable. And if the postcard is turned over – 100% viewable!

I would argue that advantages inherent in postcards as a communication medium are enough to warrant serious consideration by advertisers who may never have used them.

But the means by which most marketing postcards reach consumers also seem to contribute to their effectiveness as a marketing tool…consumers intuitively know that there is a cost to mail, and accordingly seem to assign greater value to anything delivered that way.

This summer I was working with an intern who just finished her junior year of college. As we were discussing mail as a marketing channel, she made a comment that really struck me – “I always feel like anything I get in the mail is kind of a gift, I don’t get that much mail, so it makes me feel kind of special.”

This was not the attitude I expected of a 21-year-old American college student!

But simply from a share of voice perspective it makes sense. With nearly 10 billion emails sent per day in the United States compared to 425 million pieces of physical mail a marketer’s share of voice is also 25X greater when delivering to a mailbox rather than an inbox (or an IP address, web browser and so on).

At NaviStone our ‘secret sauce’ is using digital intent signals to get the right message to the right consumer at the right time in a way that delights consumers and performs for our clients. Whether it be in the form of a postcard or other direct mail format. Oftentimes the media choice is a postcard (if you want to hear more, please drop me a line!).

But some of the learning from that transcends the work that we do. I would offer that considering different media choices is in every advertiser’s best interest. While recent years have seen an understandable, dramatic shift to digital, that may leave ‘arbitrage opportunities’ in other media choices that savvy marketers can experiment with!