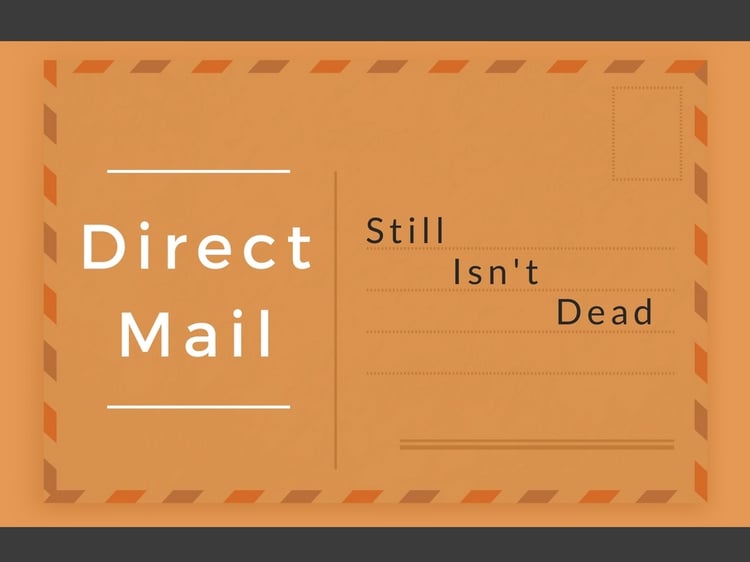 Last year, we discussed the state of direct mail and its effectiveness in a digital-first world. And while we found that it was indeed still a powerful force in 2016, a lot has changed since then. Harriet Tubman was announced as the new face of the $20 bill, Leonardo DiCaprio won an Oscar and the Chicago Cubs won the World Series. In other words, it’s a different world than it was even six months ago. Is direct mail marketing still thriving, or has it finally reached its oft-predicted end?

The Current State of Direct Mail

When we talked about direct mail last year, one of the major factors we cited for championing direct mail is that the number of pieces mailed was in a steady decline. That trend has held true for 2016. According to the Direct Marketing Association Statistical Fact Book, direct mail circulation decreases by 1.9 percent each year.

On one hand, this makes sense. As the world becomes increasingly reliant on digital means of communication and going paperless, it stands to reason that mail — and by extension, direct mail — would be used less frequently. However, this is the exact reason why direct mail is still vital. While more businesses market their brands online, the advertising space is becoming more cluttered. As a result, people are tuning out online marketing, and ad blockers are a must for many Web users.

Learn why E-commerce marketers must rethink the consumer experience and their role in delivering effective marketing at every touchpoint.

Compare the crowded online space and frequent use of ad blockers to direct mail marketing. Since mail in general is used less frequently, any direct mail advertisement will stand out much more. For instance, you might get a hundred emails a day, but only a handful of items through traditional mail. Which medium is more likely to get you noticed? And if you use individualized marketing techniques in your direct mail strategy when a consumer is at the bottom of the funnel, you’ll stand out from the “junk mail” that is so often discarded immediately.

The Influence of Direct Mail on Online Marketing and Vice Versa

It’s not uncommon for marketing industry pundits to pit digital marketing and direct mail marketing against one another. This is unfortunate, since it perpetuates the myth that channels, rather than consumers, are at the center of the marketing universe. In fact, the two methods both have great value, and each medium has been influential in shaping and reshaping marketing strategies over the years.

In last year’s article, we talked about how content marketing, while recognized largely as a digital operation, has its roots in direct mail. We’ve all received countless offers via traditional mail that look an awful lot like the email marketing we see in 2017 — personalized communications that promise exclusive content if we sign up for a mailing list or a paid service. These tactics are nothing new — and yet, they’re seen by many as a better way to reach an individual than through direct mail.

The lack of attention given to the synergy between digital marketing and direct mail is a major reason why many businesses feel as though their efforts at individualization are missing the mark. Companies are continually frustrated by the cluttered digital landscape and the ad blockers that are removing marketing messages before they reach their destination. At the same time, they feel that direct mail is too slow, or even that they don’t have the budget and tools necessary to implement a direct mail strategy that will reach modern audiences in the time and manner necessary to keep up with the competition. However, an emerging new medium allows businesses to have the immediacy and personalization of digital marketing along with the reach and response rate of direct mail, while still reaching consumers with the best bottom of the funnel medium: direct mail.

In terms of functionality, programmatic postcards serve the same purpose as automated (triggered) emails sent out by online retailers such as Amazon. When consumers demonstrate certain behaviors online, the company automatically sends out a communication about the product or products they showed interest in, as well as some recommendations for similar items. The difference is, instead of sending another email that may be ignored or sent to a spam folder, a postcard is automatically sent to the customer’s residence. It’s a technique that enables your communication to stand out a whole lot more, and because it’s a tangible item instead of a disposable email, there’s a much greater chance of the consumer following through on the purchase.

With direct mail, though, comes a sense of responsibility. If you send a postcard to everyone who looks at any page on your site, you’ll not only alienate customers, but you’ll spend yourself into a hole. The key to programmatic postcards — and, in reality, any sort of direct mail — is knowing exactly who to send these postcards to and when to send them. Focusing your energies on capturing the right data will enable you to put the postcards in the right hands at exactly the right time. The careful analysis of intent data — signs that show what is motivating a user to buy — will let you know who is ready for a postcard, versus who may still need a top of the funnel marketing piece. This combination of a reliable and effective medium alongside the internal analytics that provide insights into where an individual is on their path to purchase creates an unstoppable force.

In last year’s piece, we showed examples of catalogs driving customer spending. Even if people didn’t buy directly from the catalog, the catalog still influenced them to consider the company in a favorable light and to make an eventual purchase. The same principle holds true for programmatic postcards and for direct mail in general.

Much like email marketing or social media marketing, direct mail marketing is just one part of an integrated marketing campaign. And it is a powerful closer, with the highest response rates of any medium. The information you learn about your consumers through digital marketing should be directly applied to your direct marketing efforts. At the same time, direct mail can feed your other channels; a purchase triggered by direct mail enables you to use other marketing avenues to sell additional products to a satisfied consumer.

As we begin a new year, direct mail is far from dead, and that’s a good thing. It remains a very powerful part of any marketing campaign, and its close association with digital marketing and consumer data collection make it vital for any business that wants to reach customers in an individualized manner.

Although the world is becoming more digital by the day, the decreased clutter in physical mailboxes, as well as the attention paid to individualized marketing, makes direct mail a great way to drive a one-on-one conversation with your consumers. The use of programmatic postcards will enhance this communication, allowing you to stand out from the pack while providing the individualized service consumers will continue to demand in 2017 and beyond.