Podcast — Debunking the "Print Is Too Expensive" Myth 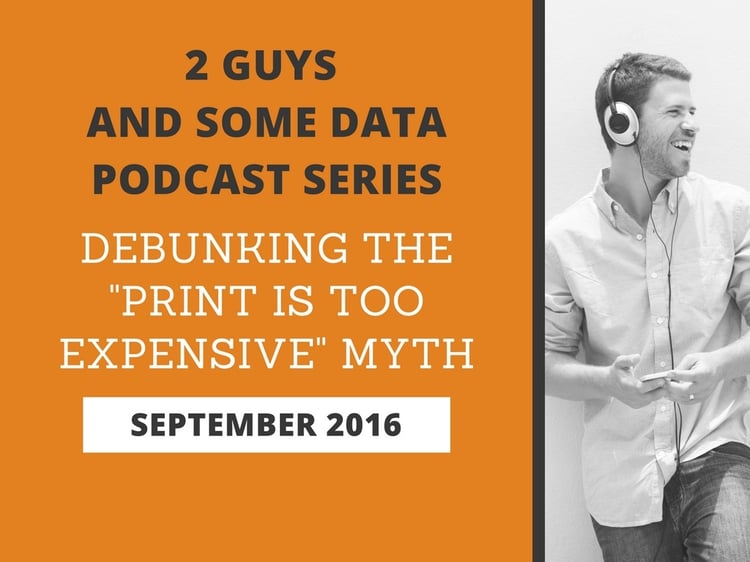 For years, you may have been hearing that direct mail is dead and that it's too expensive when compared to the cost of digital advertising. But that's simply not the reality. Direct mail is thriving and with advances in capturing intent data, the costs may not be as high as you think.

Hey to all you data-driven marketers out there looking for new ways to reach unique prospects and better engage audiences! This is the first podcast for the 2 Guys and Some Data series, giving you the nitty gritty advice you need to actually make more money.

Larry: Hi, I’m one of the guys, Larry Kavanagh,

Allen: And I’m the other guy, Allen Abbott, and today, we’re talking about the absurd notion that direct mail is too expensive. And before you say “that’s not for me,” hear us out — there are some really cool ways to use intent data to drive direct mail, and we want to fill you in.

Larry: Well, you know Allen, I’ve spent a lot of years in e-commerce and online advertising. I’ve spent millions in digital ads. And it’s always kind of struck me as crazy, this idea that direct mail is expensive. If you really look at what it costs to bid for a keyword on Google and Google Adwords today, I see keywords that go for $0.75, $0.85, $1, 2 — $3! And you get like this momentary exposure, you know where someone clicks to your website. If you’re lucky you get 0.6% or 1% to respond.

I’m sure you know, you can send a piece of direct mail for less than keywords cost today. A piece of direct mail hangs around for a while in the house, it can be passed along to people. It’s not ethereal, it’s solid — and more importantly, it can actually get higher response rates than those Google paid ads that I’ve spent millions on.

But Allen, that’s sort of my experience, I know you’re a research guy. What does the research show?

Allen: Well, the research is interesting and it changes all the time. I think some people have this impression that direct mail is too expensive because they’re looking at data from 2010. Digital advertising gets more expensive every year, the demand for it keeps going up, and it’s just not performing like it used to. And actually, there’s some really good research out there, both on response rates of different types of advertising media, and also the actual cost of acquiring a customer through different types of marketing efforts.

The Direct Marketing Association has published survey results that indicate that next to outbound telemarketing, direct mail has the highest response rate of any advertising media, and it has a higher response rate than any digital advertising media. And even more importantly, in the area of customer acquisition, which you mentioned earlier, the real proof in the pudding there is “What’s the cost of acquiring a new customer?” Marketingcharts.com did a very exhaustive study in April 2015 that demonstrated that the average cost of a new customer in direct mail was $19, where paid search was somewhere between $21 and $30, and display ads were between $41 and $51.

So the notion that direct mail is too expensive is just nonsense.

Larry: Well, you’re absolutely spot on about how the cost of digital ads have actually soared. I was actually doing digital advertising back in 2001, 2002, when it was goto.com before Google had even purchased that. I remember being able to buy keywords for $0.10, and it was a fantastic customer acquisition device. But as those costs have skyrocketed — it’s sort of a combination of two things. Not only have those costs skyrocketed, but today there is so much more competition. If you look at a Google search engine results page, all of my competition is there! I can buy a keyword, that I know the person who are searching for this keyword have the intent — they’re looking for the type of stuff that I offer. But there are top 10 competitors right there, and if you go to page two, there’s my next 10 competitors.

So you know, I don’t own that word. In fact, I’m fighting for it. The real interesting thing that’s going on in direct mail, as you know, is you can now take visitors to your own website, people who have shown that same intent — in fact, shown more intent — and actually send those folks direct mail. What’s key about that is I’m the only one who knows who’s visiting my website. I get my own crack at those visitors, nobody else does. Not only am I getting a really responsive piece, but I get to own the audience. To me, that’s the really interesting thing about how you can use direct mail in combination with web behavior today.

Allen: And you know, we actually have our own data thtat demonstrates how intent can be so important in driving successful direct mail. One of the key things you mentioned is that those audiences are unique names. So 90-95% of those people that you pull off your website based on their positive browsing behavior and go out and get names and addresses for, are unique to your mailing. It’s additive, and also, you’re beating your competitor to the mailbox.

That’s a very important element people are not considering when they talk about direct mail. But let’s talk a little bit, Larry, about why this perception that direct mail is too expensive. Here’s a question for you: Seeing that right now Nike is trading at $58.66, Yahoo! at $42.52, UPS at $109.83 — which one should I buy?

Allen: Why don’t you know?

Larry: I haven’t researched any of those stocks and I’m not a stock broker.

Allen: Right. You know, the same things happens in businesses all the time. You have CFOs and CEOs who aren’t familiar with the effectiveness of direct mail. They took a look at the cost of a mail piece — and you know, with a stock obviously you want to understand what your potential return on investment is, what the history is of the effectiveness of that investment — very smart people don’t bother to do the same thing when they’re looking at direct mail. It’s not the cost they should be looking at, it’s the return on advertising investment, as it should be the case with everything they look at in their portfolio.

Consumers are leaving really valuable clues on clients’ websites about what their  interests are, how serious they are about buying what they’re looking at. As that intent information increases in intensity, then it makes sense to do something that has pizzazz to it that’s going to make an impact, i.e. direct mail.

Larry: Gotcha. So you did throw me for a little loop there, I wasn’t quite sure where you were going with those stock prices, but yeah, you’re right. It’s not just the price of something — not just the price of a stock, the price of a particular advertising campaign — it’s “What are you going to get for that?” “What’s the return going to be?” Direct mail produces a fantastic return when it’s targeted right, when you have the right audience. There are a lot of horror stories about people mistargeting direct mail. If you take something that costs $0.75 a piece and you mistarget it, yeah, you’ll have a terrible result.

Same thing with Google Adwords though — if you pay $1 for a keyword, and you send it to a landing page that is a terrible landing page that can’t convert, you’re going to get killed! I did that several times in my earlier career. I can testify to the fact that sending folks to a landing page that doesn’t match the message in digital advertising will get you killed. However, when you have the right audience, and you have the right offer and landing page — and you know that that’s what that audience is interested in — then that’s the real key. Then, and advertising media can work fantastically well, and direct mail is particularly good at that.

So, I think that’s all we have for today. Thanks to everyone who listened to two guys ramble about data and marketing — and the stock market apparently.